Anyone who didn’t know Capt. Leland Haun would describe him as a quiet person. But he was very well rounded according to his peers who describe him as a jokester, artist, comedian, ferocious reader of books, but first and foremost as a family man. He earned a Bachelor’s Degree in Industrial Arts from Fresno State University in July, 1989, and joined the Air Force that some month. 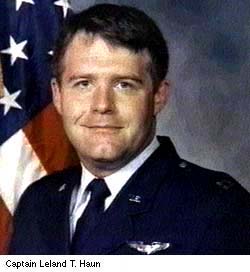 His first duty assignment was to the 41st Electronic Squadron at Davis Monthan, Ariz., where he made quite a name for himself during a training exercise, according to Johnson, then a load master with the 41st.

“On the HC-130, we do a lot of radar jamming,” Johnson said. “During this particular exercise, their objective was to knock out the communication with the ground battle field. Instead of hitting the battlefield, Haun cut the comm between the chow hall and the battle line. Nobody got called for breakfast or lunch, so everything came to a standstill. They got debriefed and told that certain frequencies couldn’t be jammed anymore because people had gone 18 hours without eating.”

He was known for those same types of antics at the 71st. He joined the rescue squadron here in June, 1994. He was credited with saving a life when he participated in a rescue off of ship, 1,600 miles off of the coast of Florida.

Haun, a former college volleyball player, distinguished himself in Saudi as well. He received a ton of mail while deployed. “He always had mail coming from his family. Constantly, and he always sent letters to them too,” Kochis said. “He would get at least two letters every day!”

“How can I explain how great the guy was?” Jenson asked. “I mean, I know how I feel, but I can’t describe it. There really aren’t any words. But that’s what he was…great.”